2.Creating a Guild costs 500 Gems.
Upon the Guild’s creation, an invitation to join the Guild will be broadcast on the World Chat.
Additional recruitment notices can be made at 50 Gems each.

3.Guild Applications
Players can apply to a Guild from the World Chat, from recommendations, or from the search interface.
At any given time, each player can only apply to a maximum of 3 Guilds.

4.Contribution
Each point of Energy spent by Guild members will be converted to Contribution. The maximum amount of Contribution each player can have is capped at 400.
The total Contribution from all members of the Guild will be tallied as the Guild’s Contribution. Guilds with higher Contribution have access to more Guild Maps and are more likely to appear in the list of recommended Guilds.

5.Guild Maps
Guild Maps are campaigns that are only available to players in Guilds. 4 to 5-Star Creatures and lots of Guild Credits can be obtained from Maps.
Team up with Guild members and take on Maps to climb the damage rankings and earn Guild Credits.
Guild members will team up to take on Dungeon bosses found in the map. A bonus reward will also be given to the member who lands the killing blow on the boss!
To top things off, the Guild Map also has a high drop rate for rare Creatures and Essences! Note that these drops are higher than normal but still limited, so be sure to apply for them in the Guild interface.

6.Guild Mall
Better save those Guild Credits! Coming in the next update, the Guild Mall will allow players to spend Guild Credits on rare Creatures, Heroes, and other items.

7.Guild Battles
Guild Battles give players a fresh take on combat. There are more details coming soon, so watch out for it in the next update! 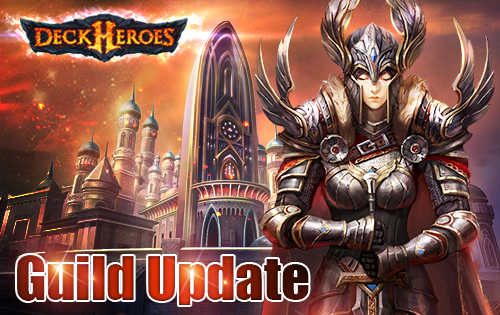 This looks awesome. But expensive to be the guild master

Gavna Rated on 12/18/14 4:20:08 AM
Any other ideas to bleed us of our hard earned cash?? 500 gems is an outrage!! Gems are needed to buy other things, nevermind creating a bloody guild, we need it to cost coins not gems! Keep it up and you will lose a dedicated level 50 player. I already left other games because they changed to make it more pay to win. I will do it again if I have too and I bet I am not alone.

So how many players can a starting guild holds? And how much it cost to increase member number?

But is possible donate gems for guild?

I wanna make one But first i need understand all.

Wow seriously, the game is free, stop complaint and learn to play. 500gems is not a big deal anyway. If you can't accumulate 500gems , just leave allready, you get 300 just on day 14; you get many from arena, its just easy....I'm lvl 38 and got ton of free gems so far.I'm ranked good everywhere and enjoy the game, all this without spending a dime,

Just started today, but I am already in love with this game.

So count me in, I check the game very often, no energy will go to waste ^^

The guild capacity is 50 currently. Don't know about if it's possible to extend this limit currently.

Can you update guild battel? It's so bored if there is not war.. thanks sir..