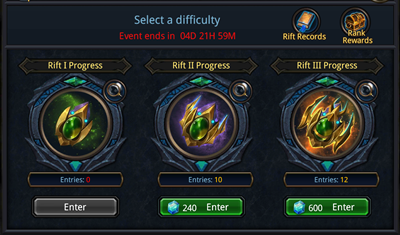 1. Players can choose from three Rifts during the event. The entry costs, number of entries and rewards for each Rift are different.
2. Progress through Rifts by opening Chests but look out for Traps. Opening one will bring the journey to an early end!
3. Open Chests to get rewards and Points. Reach the specified rank in the Point Rankings and get the corresponding rewards!
4. While progressing through a Rift, players can outbid each other in an Auction for a Detect Trap. Only the winning bidder will benefit from its effect while the bids placed by the other players will be returned.
5. Each player will start with free uses of Detect Trap. Using one will reveal the location of a Trap so deploy them wisely.
Using one will reveal the location of a Trap so deploy them wisely.
6. The spawn rate and location of the Trap for each player may be different.
7. If you become inactive during the event, the game will enter Idle Mode and proceed automatically. To get out of Idle Mode, simply return to the game. (The game will not place bids or use “Detect Trap” in Idle Mode)
8. Rift Records show the progress made and Points earned from each Rift. Only the 50 most recent records will be saved.

Will this be a New event

In which way you need help