Deck: At the start of your round, a card will be drawn from the top of your Deck and placed into your hand.

Hand: You and your opponent will be able to see Creatures in each other’s hands. With each round, the wait time of your Creatures will go down by 1. A Creature can be played when its wait time reaches 0.

Graveyard: Creatures with 0 HP will be sent to the Graveyard. 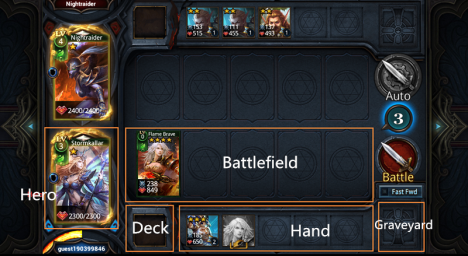 Combat: Hero Skills and Talents will be triggered first. Creatures will cast their Skills afterwards and attack from left to right.

Heroes: Heroes all have unique Skills, Talents, and Health stats. Your Hero’s Health is based on its rating and your level. Skills and Talents are all casted under different circumstances. Your Heroes build up Rage when your Creatures attack and vice versa. When a Hero’s Rage meter is full, your Hero will unleash its Skill. Talents are also triggered when the conditions are fulfilled.

Auto-Combat vs Manual Combat
Manual Combat: Strategically decide on the order in which Creatures are played and whether you want to play any Creatures for that particular round.
Auto-Combat: Deck Heroes will automatically play Creatures that have reached a wait time of 0 for you.
You can switch from Manual to Auto-Combat but not vice versa.

Victory: You’ll win by either destroying all of your opponent’s Creatures or by reducing their Hero’s Health to 0.